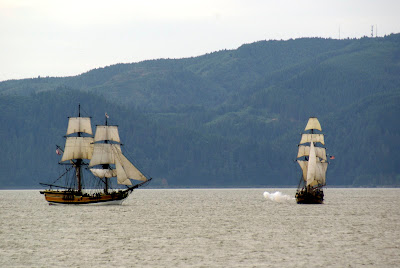 At least for me.

The Hawaiian Chieftain and the Lady Washington are in local waters again, this time for a short stay.

I was preparing to go and see them in the mooring basin when I turned around to see them both plying the river just west of my house.

Once again I changed plan and made for the trailhead at the east end of the lagoon.

I got smart this time and set up the tripod at the outset so nothing fell victim to "the shakes" as the shooting session went on.

A really good move, as it turned out... I shot more than 150 frames, all with my longest lens.

This was one of the first. I didn't know in advance that there was a mock battle in store. I was merely setting up and testing exposure when I released the shutter on this one. The report didn't reach me for more than a second, and the smoke plume was invisible as I made the shot, as the mirror had just flipped up.

This is the first 320th of a second of the "battle" that would rage on the Columbia for the next couple of hours.

Posted by NWWanderer at 9:07 PM No comments: