Just One of Those Things

The Splendeur has been hanging out for something close to a week.  She’s my new temporary neighbor. 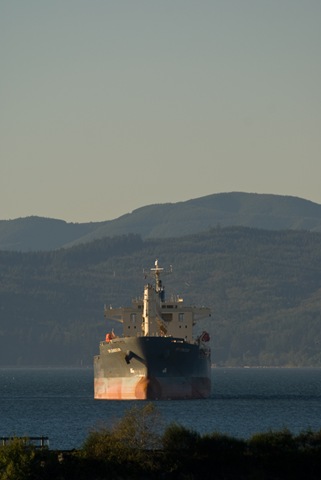 Still, it’s pretty rare to have the tide, current and solar aspect collide in such a manner that I could make this shot from my front steps.  But, that’s what happened this evening.

Posted by NWWanderer at 9:11 PM No comments:

Not Pretty, But Necessary

The Dodge Island has been (and still is) very busy in the Astoria area again.

The channel has to be dredged regularly, or upstream ports would be strangled off from international marine traffic. 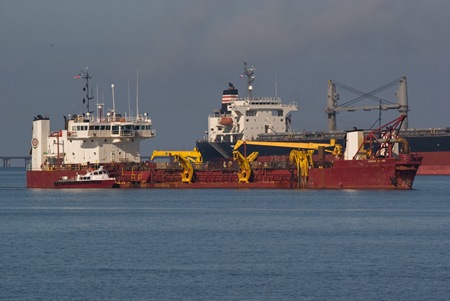 A small bonus in this photo was seeing the Columbia River (the smaller launch hauled alongside the dredge) was afloat again.

The Columbia River was the subject of one of my (and apparently others’) favorite abstract maritime images.  The last time I’d seen her, she was being hauled rather ignominiously out of town on a large flatbed.  I was afraid that she was going to be scrapped.  But, she’s back at work, and I’m happy to see it.

Posted by NWWanderer at 7:30 PM No comments:

Some weeks ago, Joanne (of The Ship Report) broadcast a series of segments on naval architecture that featured Captain Robert Johnson, a Columbia River bar pilot.

As he described the evolution of design of bulk freighters, my heart kind of sank.  Maybe I was wrong, but it really seemed that he was saying that prettier lines weren’t profitable because “block coefficient” was the key to shipping revenue.

I had always believed that a sharp bow with rakish lines would be the best way to make headway.  But this appears to not be the case. 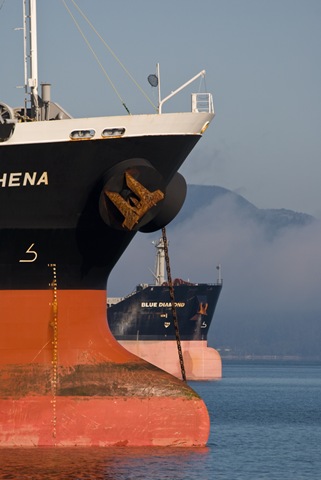 The Eternal Athena (foreground) represents (to me, anyway) the look of a beautiful bow.  Fill her holds and send her to sea and the proud, angled prow will be all that you see.  The Blue Diamond (background) seems to represent the best of what the future has to offer.  I’ve seen considerably uglier ships already.  The bow’s profile gets closer and closer to plumb (vertical) as time goes on.

I’m really not looking forward to the day when all the ships plying the river are distinguishable from barges only because they have stacks and a house poking above their afterparts.

Posted by NWWanderer at 6:53 PM No comments:

And this doesn’t even show all of it.  There are two more laying at anchor on the south side of the navigation channel. 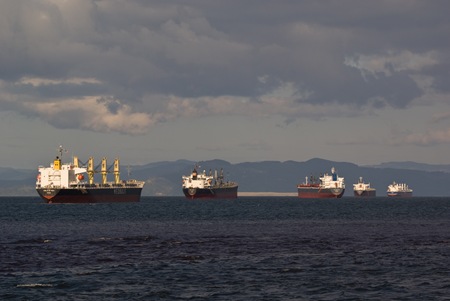 The Cielo di Pisa is anchored about even with 9th Street, and the United Milos is the main feature of my outside view right now… so there’s about a three mile distance between the first and last in this frame.

It’s not a really exciting photograph, I know, but given that the Chavin Queen and Splendeur are just out of the frame, it’s an encouraging indicator of the shipping volume we’re seeing these days.  Since these ships are all preparing to export goods, that can’t be bad for the economy.

Posted by NWWanderer at 10:30 PM No comments: 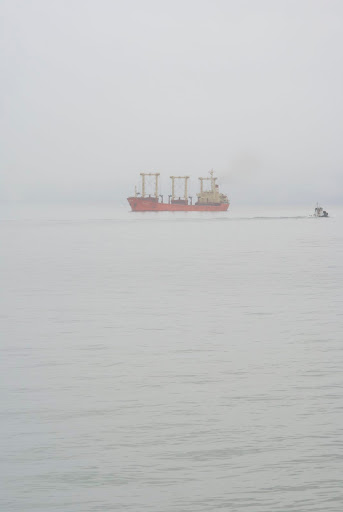 The Sammi Crystal won't be back.

I finally found an article in the online version of the Otago Daily Times (on New Zealand's South Island) that confirmed her fate.
Sold to a Chinese shipbreaker for about $2.9 million.
I thought the article was particularly interesting in that it noted the passing of the ship because it holds the record for the most port visits there of any bulker.
Another snippet of an article that I couldn't read the entirety of indicated that the transaction occurred (or was announced) on May 17 of this year. Interesting coincidence, as that's my birthday.
Posted by NWWanderer at 11:11 AM No comments: