I’ve lived here in Astoria for nearly four years now and had still never seen any locally-based Coast Guard cutter except the Fir in motion.

Sunday, on my way back from downtown, the Alert was approaching the dock at 17th Street.

A couple of gulls, a cormorant and a heron hung out to watch, too. 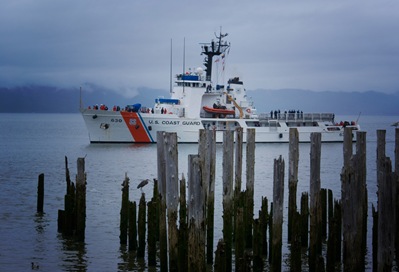 A crop from a frame taken in December.  I started to see it differently as a monochrome image.  The aspect ratio doesn’t work really well in the blog column.  It’s best viewed by double-clicking on it.

Where do you think the fish are?

I took a few minutes after finishing my lunch today to check marinetraffic.com.  I really wanted to see what was in or near the Astoria anchorage, but what was going on offshore caught my eye.

The purple symbols are “other” craft.  (Click on the image to see the larger version and legible legend)  Most of those shown are fishing boats, with a couple of pretty significant pleasure cruisers thrown in.  Were they out there for the fish?

It’s probably a good thing that the local gillnetters don’t use AIS… they might overload the system on days like these!

Posted by NWWanderer at 8:20 PM No comments:

Just before leaving the office tonight, I checked marinetraffic.com to see if there was any activity at Pier 1 in Astoria.  I’m learning some tricks there… if you click on a vessel and then click “show track”, you can get a reasonable representation of the ship’s movement.  Sure enough, just as I looked in on it, it had begun to swing away from its mooring point.

Being a couple of miles downriver at that point, it seemed the perfect time to head out and photograph it.

I chose the west end of the Hammond mooring basin mostly because I hadn’t done it before.  When I arrived, it was clear that lots of other folks HAD done it before.  The parking area closest to the river was clotted with cars.

The pilot vessels Chinook and Columbia are homeported just a hundred yards or so from where I parked, and their masts were clearly visible as I pulled up.  It’s been my luck to find these sleek boats idle at the dock every time I’ve been here.  I didn’t expect anything different today, even though I’ve seen and photographed the Chinook in river-pilot waters.

Today was different, though.  As I was changing lenses in the car, I saw the Chinook dart out of the basin’s mouth and head upstream.  It just disappeared around the earthworks, but I (rightly) assumed that it would be back soon.

It charged back downriver, 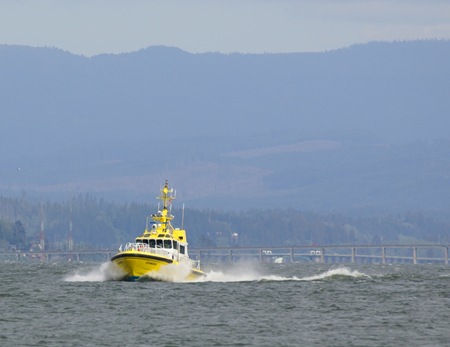 but then made a sudden course change and headed back toward the boat basin. 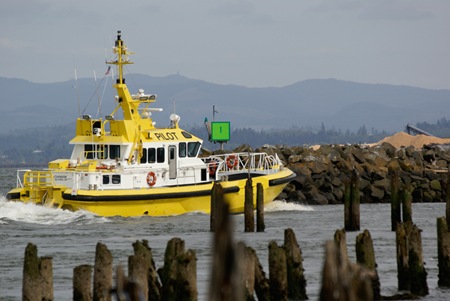 Within a few minutes, the Columbia raced out of the basin’s entrance, ahead of the cruise ship. 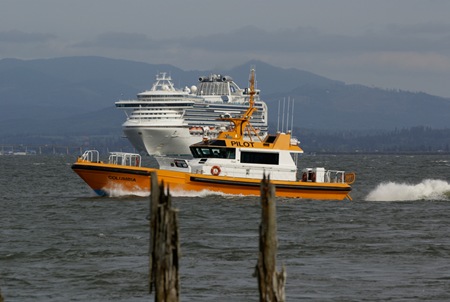 I have no idea what the story was… the queen bee being replaced by the junior boat seemed odd, but since I was able to capture both, I’m not complaining! 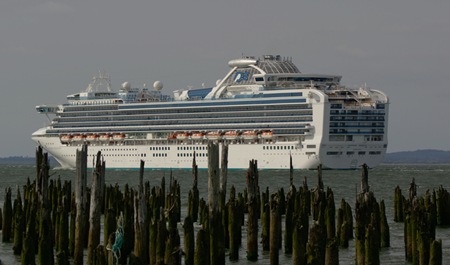 Posted by NWWanderer at 9:14 PM No comments:

A Chunk of History 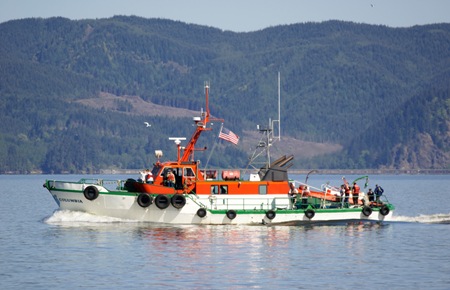 Saturday morning was almost miraculously clear and calm.  It would have been a great day for photographing ship traffic, had there been any.  But there was only one ship at anchor, and it wasn’t especially photogenic.

As I walked along the breakwater at the East Basin, I did notice a lone vessel making its way downriver.  Far too small to be a cargo vessel, but larger than most pleasure boats, I kept checking its progress as I wandered.

As it came closer, it really got my attention.  The color scheme matched that of the Peacock, the big, brutish retired pilot vessel that had spent most of the last ten years tied up and fading in the sun in the basin.

I don’t have the full history on the Columbia except to know that she was the predecessor to the current, smaller pilot boat based in the Hammond basin.  She operated during some (many?) of the same years as the Peacock did, though she didn’t go out in the really heavy weather.

Even though she no longer wears the prominent “PILOT” sign on her superstructure, her purpose is unmistakable, what with the “daughter boat” pulled up onto her afterdeck.

Her decks were fairly crowded with what looked to be a group of teenagers.  Lucky kids to be out on the river on such a great day on such an impressive boat!

PS:  Just a few days later, the “new” Columbia darted out of the Hammond basin as I was setting up to photograph the Sapphire Princess leaving town.  So, here’s what the new version looks like: 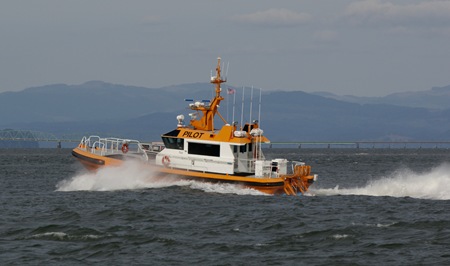 Posted by NWWanderer at 9:45 PM No comments:

Driving into Portland for a Mother’s Day gathering, I caught sight of a ship heading upriver as I made my way down I-5.  Doubling back at Kalama, I stopped at a beach access point that I’d never noticed before and waited.

It didn’t take long for the Colorado Voyager to heave into view.  The Gracious Sky is taking on cargo in the background.

This isn’t Formula One… these are pretty ponderous heading changes.  But, while it may not exactly be a white-knuckle experience, it’s not a stretch to imagine a small bump of adrenaline pumping through the river pilot’s bloodstream as the tanker rounds this bend. 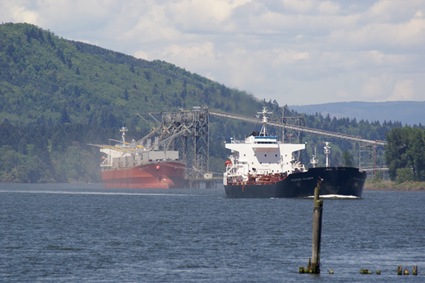 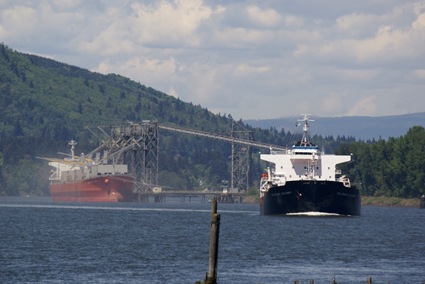 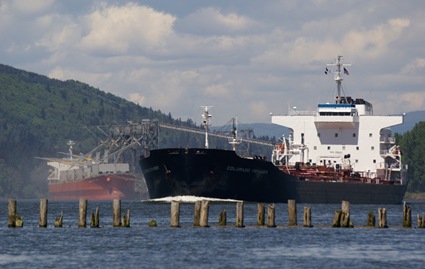 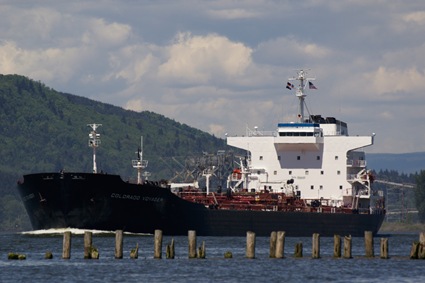 Posted by NWWanderer at 11:54 PM No comments: