The Stuff You See Later

And so there are sometimes some real surprises when an image is opened onto something exponentially larger than the 3” LCD screen on the camera.

A case in point: 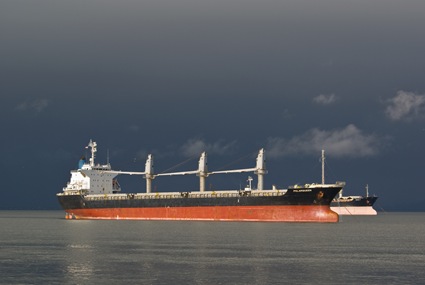 Depending on your computer and display adapter, you might (but probably won’t) notice the tiny dot just aft of the third crane stanction.  If you look at the larger version of the shot, you’ll see what I’m talking about.  There’s a guy out there, creeping along the crane cables.  (I’m assuming that it’s a male… most of the crew on ships like these are still male)

I had no idea that he was there when I was shooting this stuff.  I was just paying attention to that big, dark band of nastiness that was creeping up on the other side of these ships.

Less than ten minutes after I made this shot, the torrential rain that those dark clouds were carrying had swept over the ships and everything else nearby, and I’m pretty sure this poor sod was still out there attempting to inspect the cables that he was traversing.

If I’d have realized that he was out there, I would have stretched things a bit… I had focal length to spare.  But he was just about impossible to see in the viewfinder at the time, and really, would I have known to look for him?

Posted by NWWanderer at 9:59 PM No comments: 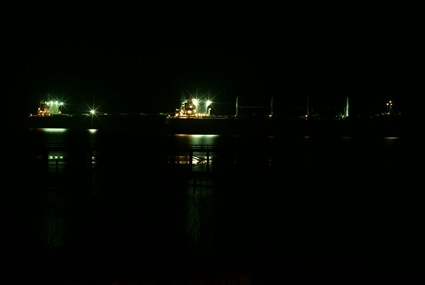 A shot from the front porch. It’s best to click on it.

It’s about 38F outside, but there’s no wind at all here, and there are stars overhead.  There are nine vessels in Astoria’s anchorage tonight, and five of them are visible from my windows.

No crop, no post-processing, no filters.  Sigma 105mm @ f/8, 10 seconds.  Don’t trust your meter for these situations!  Tripod mounted.

The rain was just too steady to try to shoot it, but the Peacock’s running and navigation lights are glowing again.

As I drove by this afternoon/gloom, it was hard not to notice the green starboard lantern and the running lights on the old boat.

As it was, the rain sheen distorted and flared the light unexpectedly.  No way for me to shoot that, but I’ll work something out in good time.

Posted by NWWanderer at 9:13 PM No comments: