Multiple files of exactly the same subject combined with different exposure values and then tone-mapped to death can result in some really dramatic images that have very little in common with reality.

On the other hand, neither sensors or film can even begin to duplicate the dynamic range available to the human eye, so it’s a perfectly natural, century-plus old challenge to duplicate on paper (or on screen) a scene that a sensor (or film) can’t manage as a “flat” (read: “uncorrected”, “unmanipulated”, or even (gasp!) “un-Photoshopped”) file.

I shot one of those scenes today.  It was moderately bright, heavy overcast, with lots of detail in both deep shadows and bright highlights.

In a single shot capture (made in RAW mode), the result was flat, and only accurate for the mid-tones.  Deep shadows and bright highlights both blocked up. 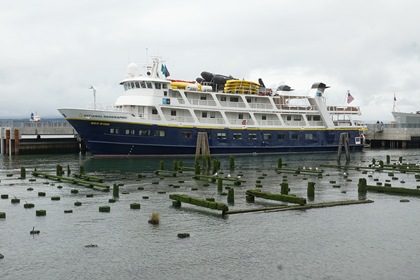 … which, honestly is not awful, but that’s faint praise.

So, I switched shooting modes in the camera, went to “ExtraFine” (or whatever it is that Sony calls the largest .jpg file available) in order to be able to take advantage of the camera’s build in HDR mode.  I have it set to a six-EV (six “stop” for geezers like myself) bracket, so I braced myself on the rocks along the riverwalk (the tripod having been left in the car on this bright-ish day), and blasted away.  Three files captured in the blink of an eye, and processed about ten seconds later.

The result was the basis for the image that follows, with a few seconds worth of manipulation in Lightroom… the same basic adjustments that I make to almost any file prior to any sort of use, even just email. 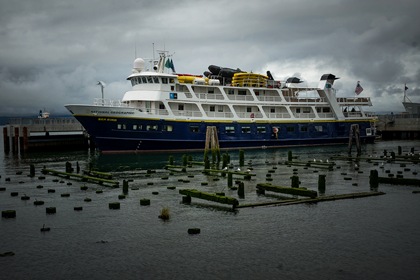 Not a bad result, actually.  Though, if one looks carefully, some ghosting is visible where people were moving on the afterdeck and just about amidship, where a bos’n is going about his work.

I was quite pleased with it, but I couldn’t help but wonder if I couldn’t come close on my own using a single RAW file.  So, I tried again.  The original result is similar to the first shot above. 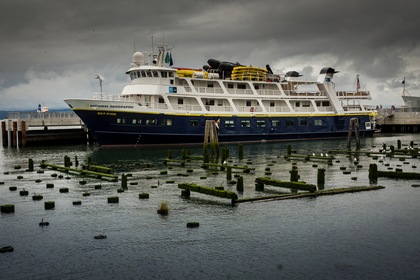 This last version required several adjustments and two gradient filters in post, but the final result was ready to be converted for web use in less than ten minutes.  I wasn’t holding a stopwatch, but it was quick.

So, I think I’ll keep trusting a single shot for daylight “HDR” needs, though I have no doubt that nighttime shooting is another story altogether.

However, if you don’t have Lightroom or another good RAW interpreter at your disposal and you DO have a Sony camera at hand with built-in HDR, steady your rig and fire away!  The results can be surprisingly good.

Posted by NWWanderer at 11:15 PM No comments: