Angles and Curves Caught My Eye

I wasn’t lacking for things to do this evening, but when I glanced out the window and saw only the proud prow of this ship, I figured it was time to change lenses and head for the porch.

I’m not a naval architect, so what appeals visually to me may not make any economic sense, but the Ocean Hawthorn’s rakish bow made me think that “this ship means business”.  And she had a fair amount of style, to boot. 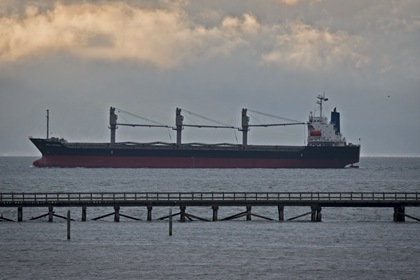 She’s a bit unusual in that she’s leaving the river “light”… without cargo.  Her AIS information shows that she’s heading from Longview to Vancouver, BC, though she’s still heading SW as I type this.

Her rakish profile would be evident even if she was fully laden, though.  That’s a seriously aggressive angle on her bow’s profile, and it’s accentuated by the bullnose that’s usually hidden underwater.

Before I could even head upstairs to upload the image shown above, another ship hove into view.  Up until a few weeks ago, I’d never seen this line, and now, it’s two in a row for ROROs in the evening for me. 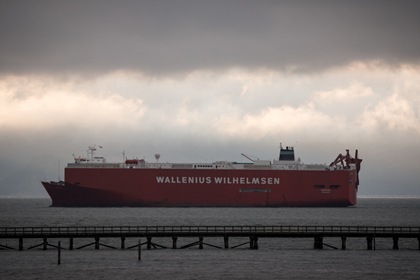 This is the Terrier.  Norwegian flagged and heading for Pyungtaek, South Korea.  Just guessing, but I think there are more Hyundais and Kias in her future.

I would apologize for the omnipresent trestle in the foreground of so many shots, but I’m actually hoping to one day see an actual train on it.  In a perfect world, I’d be able to capture a steam locomotive making a transit.

But, I’m not holding my breath.

New Kid on The Block

The Arrow 2’s days as the primary river pilot transfer boat are numbered.

After more than 50 years in service, she’s in the process of being replaced by the Connor Foss, a boat that more closely resembles its bar pilot cousins than the “Little Toot” outline of the Arrow 2. 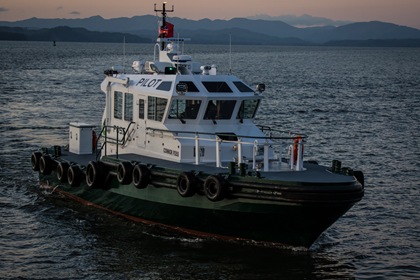 And for a little contrast, a shot from last evening, with the two boats together: 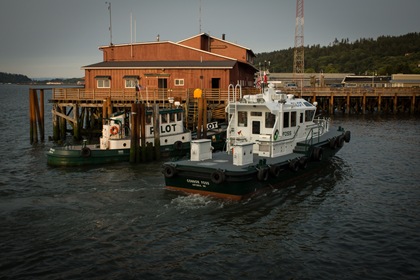 Both shots were from the catwalk at Baked Alaska, a perfect place for eating, drinking, merry-making and ship watching.

Incidentally, the “Connor” in the boat’s name is a real person.  He’s eight years old now, but his actual name is Connor Mitchell Hansen, a relative of the Foss founders.  If the boat that bears his name lasts as long as its predecessor, he’ll be well into middle-age when it’s finally retired.

Sometimes I wonder why I ever look away from my front windows.

I’d bopped downstairs for some random chore and glanced river-ward.

As always, the first instinct is to reach for the camera, but… “The card’s still upstairs in the computer!”

Very fast trip up and downstairs, fingers flying over the controls on the camera, out the front door and… 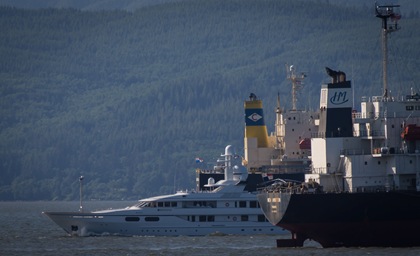 Settling in as the yacht made its way seaward, I paid more attention to focus points than individual details.

It wasn’t until the upload was complete that I really saw what I’d been tracking. 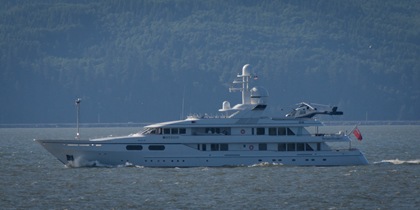 In hindsight, the main rotor blades are nearly fully visible in the first shot, but I really didn’t see them.  I have no excuse for not seeing the helo until it was on my computer’s monitor except that I was focusing on, well, focusing.  At that range, with that light and that lens, there’s not a lot of room for error, and I didn’t want to miss it.  So I didn’t even notice the helo in real time.

I just think of the maintenance cost of both vehicles visible here and cringe.  Never mind the purchase price… the ongoing costs are staggering.  There’s clearly another reality afloat here.

Posted by NWWanderer at 7:27 PM No comments:

There, I said it.

For years, that domain has been pointing people toward this blog for no reason at all. There’s no contextual connection between that domain and this one.

In all likelihood, Dongo visitors who land here are disappointed, perhaps even pissed off, and I don’t blame them… I probably would be, too, but it’s not something that I have any control over.

If you landed here in search of vacation properties in southern Europe or Africa and found something completely unexpected… GET ANGRY!  But not at me… go after the webmasters at Dongo.

I don’t even know what their game is, but it’s not mine.  If you got pointed here and liked what you see, you’re welcome to be here, comment, browse, whatever… I’m happy for the accident.

If you landed here from a Dongo link and didn’t like what you found, I encourage you to raise hell with them, because I think you’re in the majority.

I want people to visit this blog because they want to, not because some freakin’ robot pointed them here against anyone’s will but theirs.

With great respect for your choices,