I’d barely hit the causeway to the Youngs Bay bridge on the way home this afternoon when my head snapped to the left.

“What the hell is that?”

On a large barge between two tugs was what looked like a Lego representation of a roast turkey, rendered with blue, white and yellow bricks.

And it was HUGE.  As in seven stories above the weather deck of the barge!  And that’s not including the drumsticks. 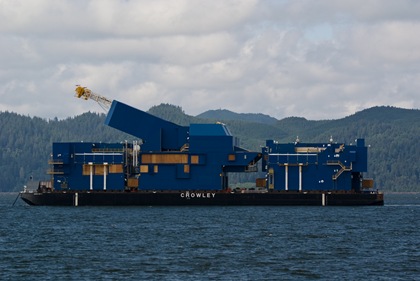 So, around the roundabout I went and headed for the viewpoint at Carruthers Park between Warrenton and Hammond.

Two other observers happened along during the passage, both asking if I knew if it was “the” oil rig headed for Alaska.  I haven’t heard anything about a drilling rig being constructed in Portland, and I’m no more in the know than any other KMUN listener, but I could tell from my ship-finder app that the next stop for this monstrosity would be Vancouver, BC.

It doesn’t look like the oil rigs that I’m familiar with, but that’s a limited sample.  Maybe it is.  And perhaps Vancouver is just a waystop, and the guesses are correct.

The whole assembly as it passed Hammond: 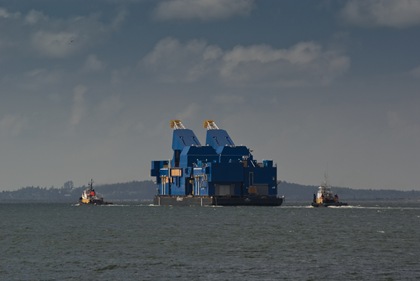