The Peacock’s last few hundred yards of travel were the combined result of an amazing array of people, equipment and technologies.
Her last berth afloat was at the foot of 17th Street.  Her final position atop her pedestals is at the corner of 20th and Marine.  The whole operation took at least five hours… probably considerably more, depending on when one considered the job “done.”
I could only stay for about 90 minutes of the operation. 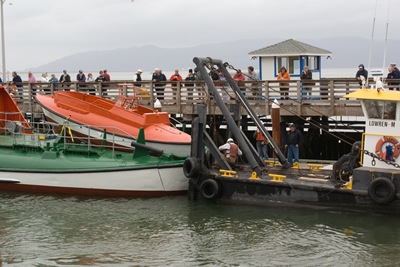 A small tug snugged up to the stern of the Peacock and the two were carefully lashed into a single unit. 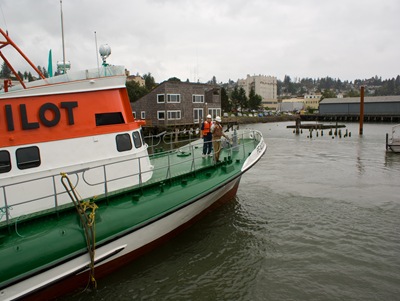 Mooring lines cast off for the last time, the Peacock slips past the Columbia River Bar Pilot’s office. 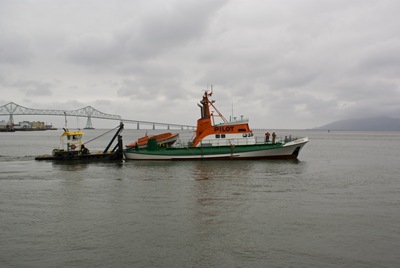 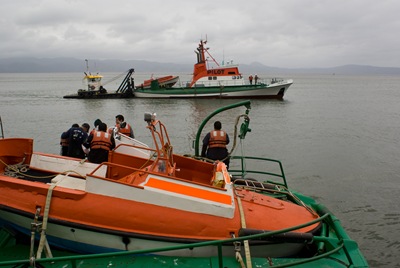 The Peacock’s companion vessel, the Columbia, was on hand to honor her passing. 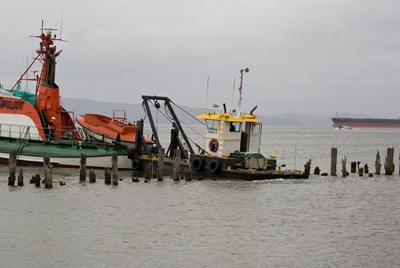 The break in the old row of pilings was just wide enough to let the tug and boat through.  Note the Arrow 2 passing in the distance. 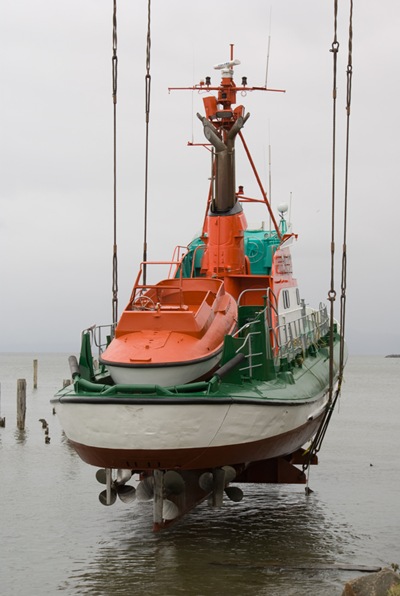 The pedestal cradles that had been invisible are finally apparent as the pilot boat is inched carefully out of the water. 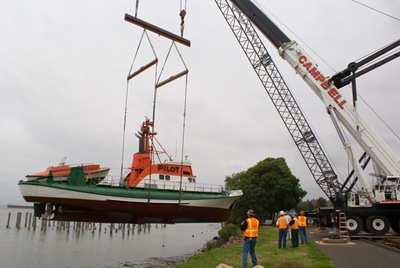 Coordinating the movements of the two cranes was painstakingly slow, but I don’t think anyone faulted the crew for that! 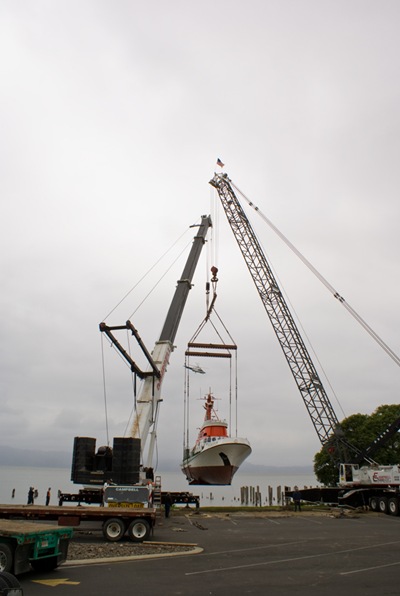 The bar pilots’ helicopter made a circuit around the operation in salute to the old pioneer.  The helo is visible between the cradle cables as it begins its return trip to Astoria Regional. 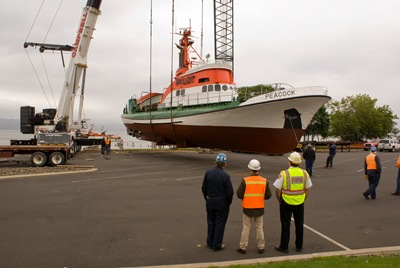 It was near this point that I had to leave.  I wish I could have seen the final transfer, but the operation wasn’t completed for hours. 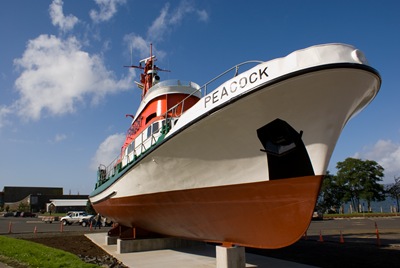 I paused on 10/10/10 (the next sunny day) to make a shot of the boat in her new “berth”.
A side note:  I’ve never seen traffic on this blog that comes anywhere close to that that was generated by the previous post.  There were more hits from more places than I’ve ever seen before… well over 100 visits!  For a lot of sites, that’s a really poor showing, but for this one, it was phenomenal.
It makes me curious, though… just who are you all?
Feel free to introduce yourselves!
Another addendum (11/27):  I found a shot of the Peacock that I made just about a year before it was placed on the pedestals.  She’d been sitting and (literally) mildewing for years, and even though her paint had been nearly fresh when I moved up here (in 2006), the neglect was showing.  Note also the reversal of the colors topside. 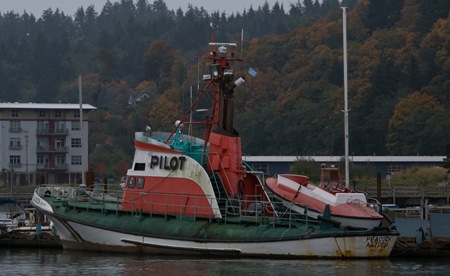 Addendum 3, 9 Sept., 2012:
I originally added this to the comment section, but I realize that it might not get read there:
Nearly two years after originally posting this entry, I've seen a really large uptick in visits from Germany, most of them coming from a forum on a site called Inselfaehren.de .
I'm happy to see all of the activity, but I don't speak German, so I haven't registered for that site. Any of those visitors who speak English care to explain the ongoing interest in the Peacock?I know that the boat was constructed there and has a lot in common with other designs used in the North Sea, but is that the only reason for all of the interest?Over the last couple of years, visits from Germany have outnumbered all of the rest of the international visitors, but this last week has been really remarkable.I'd love to hear from some of you!Scott

…to a pedestal near, well, me! 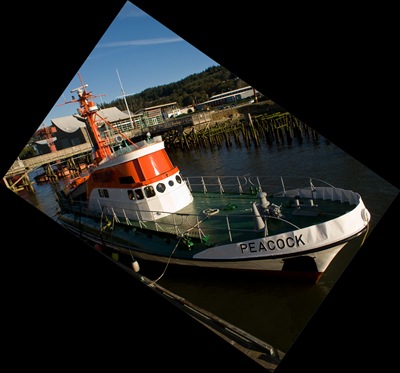 On Thursday, October 7 at 11:00, the pilot vessel Peacock will leave the waters of the Columbia for the last time and be positioned on a set of pedestals at the east end of the Columbia River Maritime Museum campus as a permanent display.

Until then, she’s at the foot of 17th Street with a spanking new coat of paint.

“No single vessel has had a more profound impact on the economy of the Columbia River basin than the Pilot Boat Peacock.” -Bar pilot Captain Thron Riggs, from the CRMM press release.

Posted by NWWanderer at 9:34 PM No comments: