The old Northern Lights Lounge at Baked Alaska ended its run on New Year’s Eve.  We were the last paying customers out the door that night.

The bar reopened last night, having been stripped to the bearing timbers and reimagined from the floor up.

With a view like that one, you’d have to work really hard at having a truly bad space, and this one is more than just “not bad.”

Being a trivia regular there, I still wonder how that’s going to work, but Friday nights aside, I think the space will work better for the typical customer.

There’s one thing they need to work on, though…

There was always an east-side entrance in the past.  It was a place where diners could come and go if on foot on the Riverwalk, and it also allowed patrons access to the catwalk to take photos of the river pilot boats and/or anything else that was visually exciting upriver.  At the moment, that door is an exit only.

The wait staff is very tolerant of me, and they let me back in if the lock latches behind me.  I think that door is an unrecognized asset, though, and I hope they decide to allow re-entry in the near future.

Last night was pretty gloomy, but it was the first full day of DST, opening night, etc., so I just couldn’t resist stepping out into the mist to take a few shots of the Connor Foss in the Arrow 2’s old slip and coming back from a run at dusk.  It was drizzling aggressively all evening, so I was grateful for the 77’s weather-sealing! 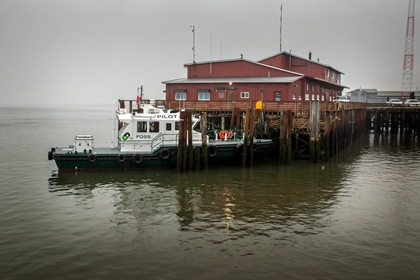 I’m sure this has been an available view for a few weeks now, but I haven’t seen it before, and it’s a little jarring.  Not bad, really, just very different.  I’ve always thought that the Connor Foss was a good-looking boat, but she’s just not the Arrow 2! 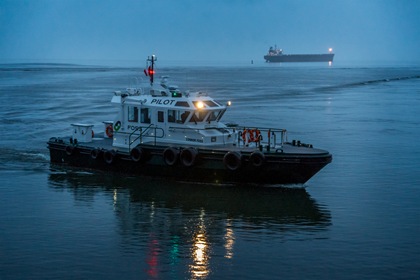 After a pilot-exchange run, well after dusk.  I had to push the ISO way up, as it was very dim.  With the lens opened to f/2.8, I was still pleased with the final result, though it took some Lightroom work to make it happen.

Posted by NWWanderer at 8:51 PM No comments:

I was drawn by good weather to Pier 1 this afternoon.  I’ve missed a lot of the visitors to the log pier, as the old dock opposite it has been in the process of being ripped up and (I hope) refurbished.

I picked my way across the exposed bents to get to a decent vantage point for the first time in months.

The ship that’s tied up, the Swakop, is especially shiny and new-looking, so I checked what I could find about her.  Marinetraffic.com’s info indicates her build date as 2013, and really, that looks plausible.  But there’s other info that indicates that she had a former name, and very few details are available.

I have to guess that the “former name” was a builder’s placeholder, waiting for the buyer to take possession and properly name her. 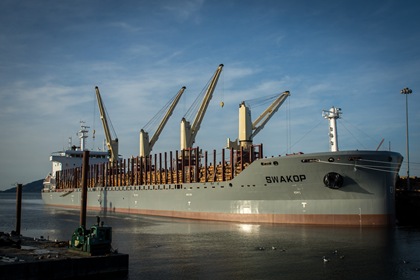 Not only is the paint new enough that the crew probably still smells it, there isn’t a single chain-mark on her bow, and her anchor appears to have never seen a harbor’s bottom.  On top of that, she’s got that newfangled (and none-too-pretty plumb bow that’s all the rage in naval architecture these days.

Posted by NWWanderer at 10:33 PM No comments: