This ship has been a constant companion in my neighborhood since mid-month.  It hasn’t been the longest stay in the anchorage that I’ve ever seen, but it’s right up there.

It’s kind of hard to miss, what with the huge “POLSTEAM” lettering that’s visible even through a lot of fog.

With the river as still as it was this afternoon and evening, I couldn’t resist a walk out to the far side of the Alderbrook lagoon with tripod and full bag in tow.

I had no idea that I’d be catching the Ornak in its last few hours of its very long stay here.  I didn’t see it leave.  I just noticed about a half an hour ago that it was no longer in view. 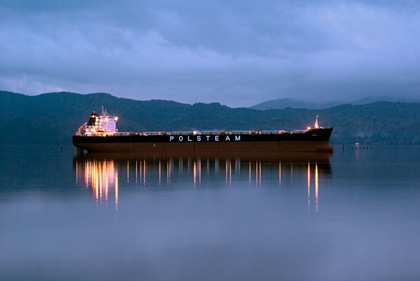 Posted by NWWanderer at 11:36 PM No comments:

The Stars (or Moon, at least) Align At Last

I’ve been wanting to photograph the Peacock at night since she first got lit up on her new perch, but between abysmal weather and (I think) a very unfortunate holiday decoration lashed to her mast, I haven’t had an opportunity.

The poor Christmas tree has been removed.  By the end of its term, the thing was slumped over, clearly exhausted from being subjected to the gales.  I don’t know for sure, but I always thought that being lashed to the top of the mainmast of any vessel must be some sort of torture.  That poor tree sure looked like it had had enough.

I don’t doubt that the intent was good, but the execution and effect were lacking.

The weather cooperated on several levels this evening, with a sliver of moon showing and the rain abating at exactly the time that I could free myself up to shoot.  I made an image that was exposed properly for the moon itself, thinking that I would make a composite later, but this is (aside from some color correction) just what the sensor picked up for the exposure of the boat. 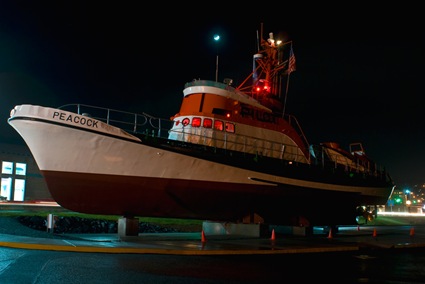 For many years running, I’ve had it in my mind to make one image that “made a damn” per day for a calendar year.

Maybe not for you, but but for me.

I was three for three.  I might post the others later, but the thing is that they mattered to me.

Today, as the light faded, I was feeling sunk as I got home, as both cameras had remained sequestered all day.  It was late, and I was tired, and I still had work to do.

But, just across the street, a vista opened up and needed to be explored. 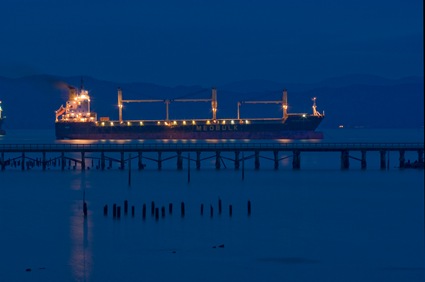 I had to walk across the street and a few doors west to capture this, but it’s by no means a far cry from what I’d see from my living room on a lucky night.

This is an 8 second exposure at f/8, ISO 200 with the Sigma 105mm macro.  Other than a less than 1 degree straightening and some highlight recovery, this is what the sensor saw without manipulation.

Feel free to click on the image to take in the details.

Did we do something wrong?

I doubt that there’s anything written down about this, but the unspoken tradition in these parts is that ships in the anchorage and occupied boats in the basins SOUND OFF at midnight as the year flips over.

So, what the hell didn’t happen last night?

It’s not like there weren’t any ships in the anchorage: 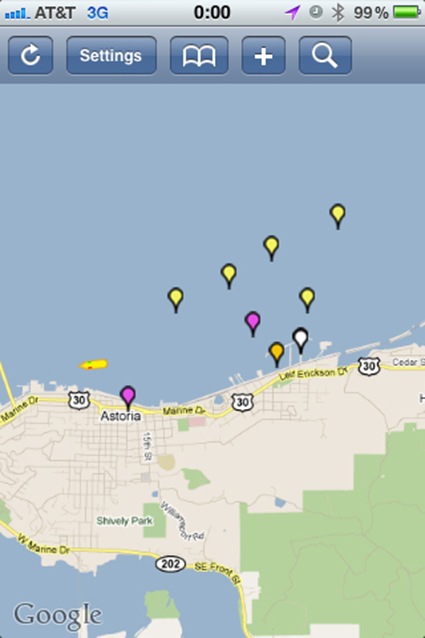 I snapped this on my iPhone at the turn of the hour, expecting the typical echoes and moans of foghorns up and down the river.  And I heard nothing.  Too cold for crickets… just nothing.

I thought that perhaps I was the only one missing the serenade, and so I enjoyed the star-show above (not a cloud to be seen) before retreating from the cold.

This morning, however, it was made clear that the midnight silence was noted by a LOT of people.  I had to go to Safeway to pick up a few things, and the snoozing of the horn section was definitely a hot topic in every checkout lane.

“We muted the TV and opened the windows and … nothing!”

“Did they get some sort of notice that they couldn’t?”

“I’ve NEVER not heard the foghorns!”

So, what the hell went on here?  An anchorage full of ships, and all with the MUTE button on at midnight as the year rolls over.  It was a beautiful night with huge potential, and even the Fir was in port (slightly to the right of the edge of this frame) and nobody made a peep.

What, kids?  Cat got your tongue?  That really sucked!