With Christmas in the rearview mirror, it seems the next big thing on the minds of Astorians is whether or not the ships are going to sound off at midnight tomorrow night.

The silence last year was deafening.  I noted then that I was surprised at the reaction.  I knew I was disappointed, but then I’m weird that way, so I rather doubted that it made any difference to anyone else.

It did, and to a lot more people than I had expected.

After hearing all of this after the fact, I wasn’t much surprised to find that someone else had done what I had intended to do earlier… asked Joanne Rideout to get involved.

If you missed today’s edition of The Ship Report on KMUN, it will still be available at www.shipreport.net for a while, but the basic takeaway on the subject is that after talking to the bar pilots about the issue, they’ll be passing the word to inbound ships’ crews that a little letting off of steam (or compressed air, as the case really is) at midnight on New Year’s Eve is a welcome thing to those of us ashore.

No guarantees are offered, but the word is going out.

Joanne’s follow-on suggestion is a great one.  If you’re within earshot of the ships and have a line of sight to them at midnight, send some kind of light signal back to them!  Car headlights, house lights, whatever.  It would be a rare opportunity to have direct, if not that personal interaction with the crews on the river.

So, I’m passing the word.  I know that there are readers out there.  Statcounter tells me so.  Some of them are even from the Astoria area.  Pass the word yourselves if you like the foghorns, and send some sort of signal back to the crews on the ships.

At the moment there are only three ships showing in the anchorage, but that can change.  Last year there were five ships and a tug anchored, and another ship in transit at the turn of the year.  That would have made a nice chorus!

Posted by NWWanderer at 5:44 PM No comments:

Calm at the River Pilot Dock

It was very foggy a couple of nights ago.

As is often the case, the fog came with an eerie calm. 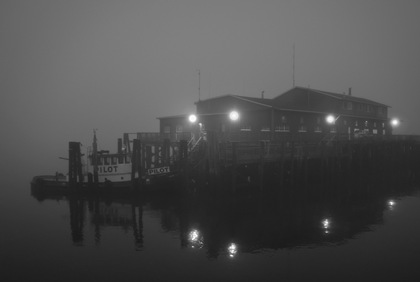 Once again, I don’t think I could have made this shot six weeks ago.

Posted by NWWanderer at 6:46 PM No comments:

Twilight. No, not THAT Twilight! 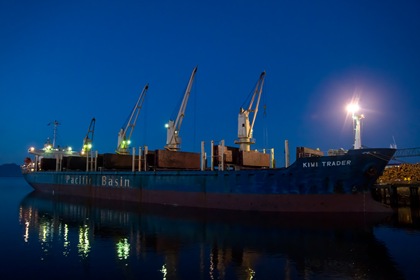 Well… six weeks ago, I would not have been able to make this image.  At all.  And if I’d have attempted it, the older version of Lightroom would have sniffed at the RAW images and only recognized them after having been pushed around a bit.

Now, it’s all easy.  And remarkably clean.  It’s not noise-free, and if the light were better, it would be sharper.  But not by a lot, and very probably not to the degree that the differences would be visible at web-resolution.

Back to the subject itself:  The Kiwi Trader has been in town for about 36 hours or so.  I’m always just a bit surprised at what looks like the leisurely pace of the loading operations at the new “log dock”.  But I’m almost heartened by that.   What I hope that means is that the crews and management are both looking out for the safety of all of the people involved.

Posted by NWWanderer at 8:34 PM No comments: 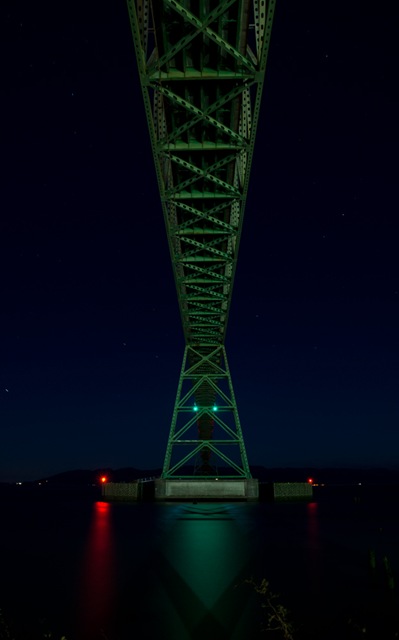 I don’t know what the wind-chill was under the bridge, but I know I wasn’t dressed properly for it.  I did, however, have the pair of “glittens” that my Mom gave me a couple of years ago, and was very glad for them!  Even so, my fingertips were suffering for quite some time after getting out of the wind.

For those unfamiliar with the sight, this is the underside of the Astoria-Megler bridge, shot at 21:50 tonight.  I note the time specifically because I was surprised at the amount of light still shows up near the horizon when looking due north at this hour in December. 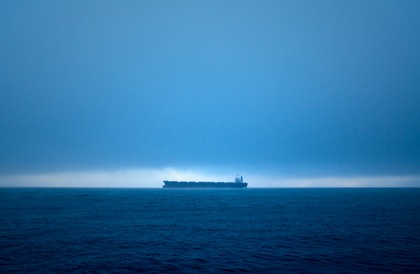 Sunday morning, not long after dawn.  The white balance was off, but I liked it.  Something to contemplate over coffee.

I know… it looks like some other shots I’ve taken from a similar vantage point.  But, don’t a lot of them?

If I didn’t like it, I wouldn’t shoot it. 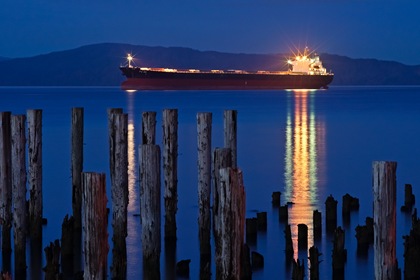 The evening’s shoot started out as an academic exercise.  I was trying to figure out how best to use the long “G” zoom in difficult lighting.

The solution, it seems, is to remove said lens and slap on the Sigma.