Breaking With Most Conventions 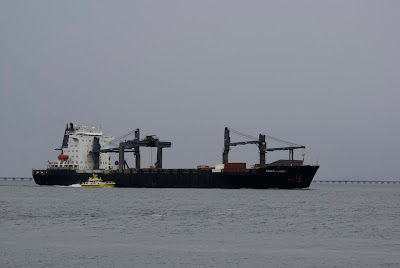 If you watch ships transiting Astoria much, and if you listen to the Ship Report and you have at least one eye at least half open, this frame looks a little strange for a lot of reasons.

I noticed the Pacific Flores when I was heading out to run some errands this afternoon.

The first reason for making my detour to a good vantage point was because I thought I was looking at two ships in the anchorage when I caught my first glimpse. The forward cranes were so mismatched in size and configuration that they just didn't seem to be sprouting from the same deck.

When more of the ship came into view, I noticed the beam crane amidships AND another mismatched set of cranes aft... stuffed right up next to the house.

All pretty strange, but it didn't end there. The pilot boat running alongside is stationed in nearby Hammond, but we seldom see the Chinook working this far inland, as she's a bar pilot boat and is considerably overqualified for the protected waters of the Astoria anchorage.

And yet there's more... look how she's riding! No bottom paint visible, so she's relatively heavy with cargo, and yet she's bound upriver. Except for ro-ros carrying cars, that's quite unusual here.

And... (lot of "ands" in here), she's got both 20' and 40' containers arrayed on her decks (the 20-footers are aft, just ahead of the house). You'll probably have to double-click on the image to see the large version to see those details, but they're there.

Posted by NWWanderer at 7:03 PM No comments: 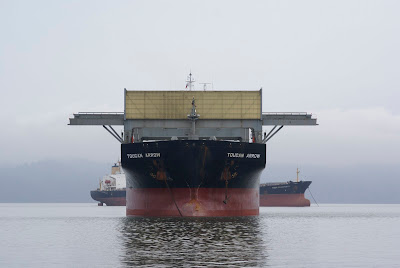 I haven't checked a tide chart, but I must have been heading home just as the tide peaked and began to ebb.

The deck gear on the Toucan Arrow struck me as strange and remarkably close at hand, so I (once again) detoured out to the East Mooring Basin's seawall.

I shot a couple of exploratory frames with the "kit zoom" but realized that the ship was just far enough away to make the 105mm a near-perfect choice. I switched lenses and started pacing the wall.

The utter calm made the river look like a lake for quite some time. After a while, the tide began to flow seaward and I noticed that the seawall itself had begun to form a series of ripples... a wake caused by a stationary object. 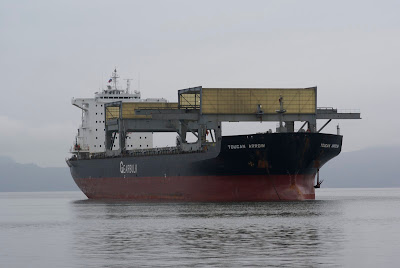 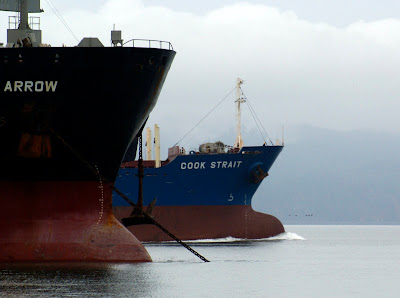 Even before I started shooting, I noticed an inbound ship making the turn north of Youngs Bay and kept that in mind as the time passed. Eventually, after the Toucan Arrow swung like a weather vane to point upriver, the Cook Strait passed her, and I was ready to capture the repeating curves of their bows.

And... I got to commune with a couple of greyhounds and swap stories with their humans.

Posted by NWWanderer at 6:55 PM No comments:

What's Wrong With This Picture?

Don't believe everything your GPS unit tells you. 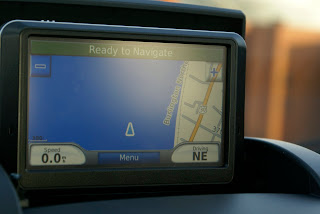 I still chuckle a little every time I'm out on Pier 39 or at the East Basin.

Feels like I ought to be calling out "Up periscope!"

Posted by NWWanderer at 6:52 PM No comments:

The JA Frontier is anchored so close to the breakwater at the East Mooring Basin that she may as well have been moored there. I'm sure the crew is probably thinking the same thing... they could probably smell the espresso at Coffee Girl earlier in the day. 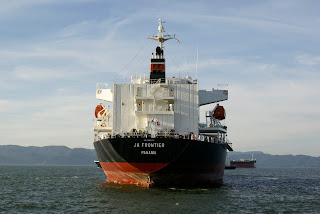 All photos are full-frame (no crops), and the first one is at the equivalent of a 50mm lens on a 35mm film camera. This ship is CLOSE. Note the bow of the passing ship (the Iris Sky) just poking out from the port side of the Frontier as the stern is barely visible on the starboard side. 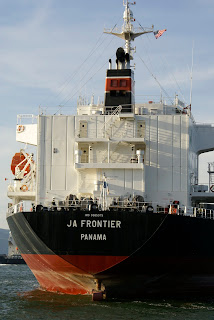 The second shot is a medium telephoto of the same ship... just showing the details on the aft end of a typical bulker. 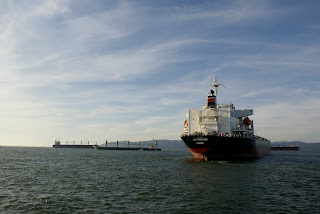 It was a busy night. There are three ships riding at anchor in the third frame as another heads out to sea with the Arrow 2 alongside changing pilots. Two more ships are at anchor a little further upstream.

Posted by NWWanderer at 6:46 PM No comments: